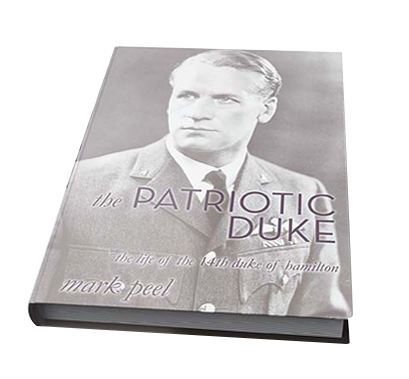 Heir to the premier dukedom in Scotland, Douglas Hamilton, Marquis of Clydesdale, won fame as an amateur boxing champion, Unionist MP and the first man to fly over Mount Everest in 1933.

Invited to the Berlin Olympics by the German government in 1936, Clydesdale became a good friend of Albrecht Haushofer, a non-Nazi foreign adviser to Rudolf Hess, Hitler’s deputy, and together they worked to improve relations between their respective countries.

When war began in 1939 Hamilton, a serving officer with the RAF, became inadvertently embroiled in a bizarre attempt by Hess to make peace with Britain. Landing in Scotland in May 1941, Hess asked to see Hamilton and given the British government’s leaden response to his arrival, Hamilton was soon the victim of a whispering campaign that had him collaborating with Nazi Germany in an effort to promote peace.

With conspiracy theorists still out to tarnish Hamilton’s credibility, this book sets out to restore him to his rightful prominence by  pointing out his persistent opposition to Nazism both in public and private and recording his many selfless acts of public service.